For moments let us go back, back in time to the year 1869 to a small town called Keans Neck, South Carolina. A group of recently freed blacks gather under the clear blue skies amid the moss-laden trees. The worshippers kneel on the velvet like grass and pray to God Almighty. They sang hymns accompanied by chirping birds and they read scriptures on a cathedral created by the hands of God. From this simple beginning evolved the Keans Neck Baptist Church of Dale, South Carolina.

The Keans Neck Baptist Church was organized under the guidance of the Mother church, Tabernacle Baptist Church of Beaufort, South Carolina. The Keans Neck Baptist Church was organized and dedicated under the leadership of Rev. R.F. Blythewood of Tabernacle. The first officers were Billy Middleton, Adam Snipes, Peter Rivers, Peter Maxwell, George Green and Daniel Gadson. The congregation gathered under a bush tent and in members’ homes for thirteen years, during which time they obtained funds to purchase land and build their first sanctuary. Under the guidance of Rev. Blythewood, the newly formed church of 230 members joined the Gethsemane Baptist Association on November 14, 1871 during the Fifth Session which was held at the Calvary Baptist Church in Columbia, SC.

Rev. Peter W. Maxwell, a Minister of Mount Carmel was elevated to pastor the church in 1924.  Thomas Heyward, Dan Simmons, Jacob Cuthbert, Julius Walker, William Lesesne, Ned Simmons and Joseph Green were members of the Deacon Ministry. Rev. Maxwell served faithfully for eight years when the church was faced with his untimely death in 1932.

Rev. S.T. Bobian became pastor in 1932 after the death of Rev. Maxwell.  He led our congregation for seven years before he was called from his labor in 1939.

Rev. J.E. Johnson became pastor in 1939 after the death of Rev. Bobian.  During Rev. J.E. Johnson’s administration Brother James Thompson was ordained as a Deacon of the Church.  Rev. Johnson served as pastor for six years prior to his death in 1945.

After the death of Rev. Johnson, the Mount Carmel congregation selected Rev. J.W. Barnwell of the Dale community as their pastor in 1945. During Rev. Barnwell’s tenure the original sanctuary which stood as a beacon of faith in the Dale community for more that seventy five years was re-constructed after being severely damaged by fire. The reconstruction was completed in 1952. Deacon Parris Glover was licensed as a minister. Deacons who served with distinction during his administration were:  Ned Simmons (chairman), Joseph Simmons, William Lesesne, Sam Green, James Thompson, Eddie Kline, Jackson Brown, Thomas Smalls, Moses Watson and Alonzo Brown. Rev. Barnwell displayed his keen interest in the youth of the church by organizing the first youth choir in 1955 and supporting a strong Sunday School program. The church family mourned the passing of Deacon Ned Simmons, who served as chairman of the Deacons Ministry until his death in 1958.  Deacon Joseph Simmons was selected as chairman of the Deacons Ministry in 1960. Rev. Barnwell also played a vital role in the community. He was a civil rights leader. He promoted voter registration and was instrumental in the decision of the Greyhound Bus Company to pick up passengers in Dale and the surrounding areas. After serving our community as pastor and community advocate for twenty-seven years he resigned as pastor of Mount Carmel Baptist Church in 1972.

Rev. Reuben Dicks was selected as pastor in 1973. Rev. Dicks was a well-known educator of Beaufort County. During the time he served, membership increased, a pastor’s study was added, the Junior Choir was reestablished, the Deaconess Ministry, and the Young Adult Department were organized. On May 31, 1974 the church family mourned the passing of Deacon James Thompson.  In 1976, a new wing was added to the church. Two faithful men, Horace Johnson and Horace Dawson, were added to the Deacons Ministry. Rev. Dicks resigned as pastor in November 1981.

Rev. Elijah Singleton became pastor July 1982. Rev. Singleton was noted for singing “uplifting” spirituals before or after his sermons. He will always be remembered at Mount Carmel as a kind, gentle man. Under his leadership an organ was purchased and the structure of the church was bricked in.  On November 28, 1985, the church family mourned the passing of Deacon Horace Dawson.  In July of 1987 Joseph Kline was ordained and became a member of the Deacon Ministry. The church family mourned the passing of Deacon Joseph Simmons who chaired the Deacons Ministry from 1960 until his death on February 10, 1988.  Rev. Singleton resigned in April of 1988.

In August of 1988, Rev. James E. Moore became pastor of Mount Carmel. Rev. Moore proved to be a born leader. Our membership increased and we began to have worship every Sunday. Deacon Jackson Brown was selected as the Chairman of the Deacons Ministry in October 1988.

In 1989, Rev. J. Ruben Edwards became Assistant Pastor and Darrell Johnson was added to the Deacons Ministry. The Gospel Choir, Trustee Ministry and the Brotherhood Ministry were established.

George Dawson was ordained and became a member of the Deacons Ministry on October 13, 1991.

In April 1992 Rev. Chauncey Campbell became Assistant Pastor and served in that capacity until March 1995 when he was called to pastor the Old Fort Baptist Church.

In 1993 2 acres of land was gifted by Pastor and Sister Moore for the building of the new sanctuary. Additionally, our church ministry expanded both at home and abroad through support for the foreign mission in the Philippines and a local radio broadcast on WVGB.

Gerald Dawson, Alester Kline, Sr. and Stephney Simmons, Jr. were ordained and became members of the Deacons Ministry on April 2, 1995.

In 1996 final plans were made for the new sanctuary. On November 28, 1996 the church family mourned the passing of Deacon Horace Johnson. On March 2, 1997, Rev. James E. Moore and the congregation gathered on the site of the new church for the groundbreaking ceremony. Rev. Moore, Mother Rebecca Hunt and a representative from Cogun Industries Inc. were the first to break ground for the new sanctuary. After which a representative from each family participated in the ceremony by shoveling the earth. In May of 1997 Johnny Hannah and Roy Morris were added to the Deacons Board. The construction of the new sanctuary continued throughout the year.

On Sunday, February 15, 1998, the Mount Carmel Church family celebrated the church’s 129th Anniversary and the dedication of the new sanctuary.  On April 28, 1998 we were blessed when Minister Christopher Watson joined the church family.  In June of 1998 a children’s church was established.  The power of God moved through the congregation on July 26, 1998 when Deacons Gerald Dawson and Johnny Hannah were licensed as ministers. On November 1, 1998 Minister Terry Whitaker was added to the Ministerial Staff.

On February 14, 1999 the Mount Carmel Baptist Church Scholarship Fund was established.  February 21, 1999 was the dedication of the sanctuary’s stained-glass windows in memory of loved ones passed. In April of 1999 the church welcomed Minister Charles Griswold to the ministerial staff.  On Sunday, August 22, 1999 Arthur Bryan and Calvin Rice, Jr. were ordained and became members of the Deacons Ministry. In December 1999 Gerald Dawson, Johnny Hannah, Christopher Watson and Terry Whitaker were ordained.

Steven Green and Bernard Johnson were ordained and became members of the Deacons Ministry on Sunday, October 1, 2000.

In November 2001 Minister Jason Herring was added to the Ministerial staff.

In January 2003 Minister Johnny Hannah was called as interim pastor of New Road Baptist Church in Ridgeland, where on June 1, 2003 he was installed as pastor. The Greeters Ministry, College and Scholarship Ministry and the Hospitality Ministry were established. Renovations of the old Sanctuary began in 2003 to become the existing Fellowship Hall.  Minister Kenneth Bush was added to the Ministerial staff in October 2003 and was appointed the Minister of Music. Due to growth in membership, Ward Nine (9) was established in October 2003 and assigned to Deacon Roy Morris.

The S.H. Chisolm Fellowship Hall was completed in March 2004 and we celebrated the church’s 135th Anniversary.

In September 2006, the church formed the Med-I-Assist Program.

On January 21, 2007 Minister Carolyn Warren was added to the Ministerial staff. Deacon Isiah White became a member of the Deacons Ministry on July 8, 2007.

On February 8, 2008 the church family mourned the passing of Deacon Arthur Bryan.

On May 23, 2010 Charles King was licensed as a Minister and added to the Ministerial staff and Deacon Tyrone Willis was added to the Deacons Ministry.  The Bereavement and Counseling Ministries were established.

On October 14, 2012 Minister Damian Jones was licensed as a Minister.

On September 29, 2013 the Mount Carmel family mourned the passing of Minister Charles King, a kind and gentle man of God.

In 2017 a Digital Marquee was erected in front of the church.

In January 2018 Deacon Michael Ricks was licensed and added to the Ministerial staff. He was later appointed Youth Minister in February. In March the church began to celebrate the “Year of Jubilee” leading up to the church’s 150th Anniversary.

On November 20, 2018 the church family mourned the passing of Deacon Alester Kline, Sr.

On Sunday, March 10, 2019 we celebrated the ordination of Ministers Ramon Karney and Michael Ricks.  Henry Singleton and Donald Tillery, Sr. were ordained and added to the Deacons Ministry.

On Sunday, March 8, 2020 Deacon Isiah White was licensed and added to the Ministerial staff.

In celebration of our 151st Anniversary, Youth Extravaganza 2020 was held!  The focus was on our youth.  A Children, Youth & Adult Leaders Conference and concert took place on Saturday, March 14th.

Due to a Global Pandemic, March 15, 2020 was our last Sunday in the sanctuary.  The Church left the building…we are the Church!  All worship services, bible studies and meetings began virtually via Facebook Live, Praise 94.5 and Zoom.  Vaccination registration and vaccination clinics, food, mask and backpack giveaways, graduation parades and many other events were conducted with social distancing in support of the pandemic.

On April 3, 2020 the church family mourned the passing of Deacon Calvin Rice, Jr.

After being out of the sanctuary for a little over a year, we returned on Easter Sunday, April 4, 2021 for Sunrise Service.

Pastor Moore went on a Mission Trip to Kenya, Africa to visit Pastor Peter Olonapa and the people of the Maasailand Christian Ministries on August 7-17, 2021.  He assisted in teaching pastors and ministers as well as speaking words of encouragement to the youth.  Pastor Peter Olonapa came to visit Mount Carmel in November 2021.

Things are still much as they were in 1869, except we are no longer kneeling on the velvet like grass provided by nature but on the comfort of carpeting. The hymns are accompanied by the music of the piano, keyboard, drums, guitar and organ, replacing the chirping birds. The most important thing is still the same; the members of Mount Carmel Baptist Church are still praying to God Almighty and singing praises to His name. Our church is indeed a house of prayer. 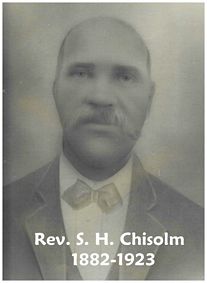 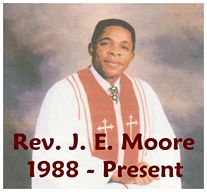 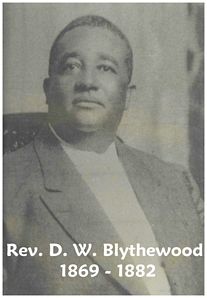 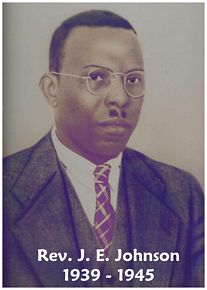 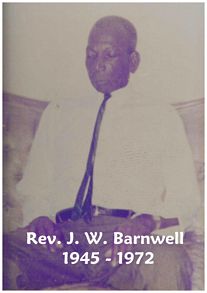 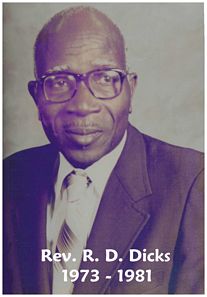 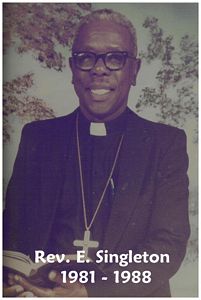